Igloo and Penguin Cake for a Child's Birthday Party

I have written before about my rather amateurish attempts at making children's birthday cakes, e.g. the bizarre looking hedgehog cake that I had to make for years for both my children.  So, my 12 year old daughter threw me a curve ball when she asked for an 'Igloo and Penguin' cake.  In Tavistock Rockin' Beads (brilliant place with tuition and some amazing beads for sale, currently running drop in Mince Pie Monday workshops) we found these penguin beads and the deal was done. 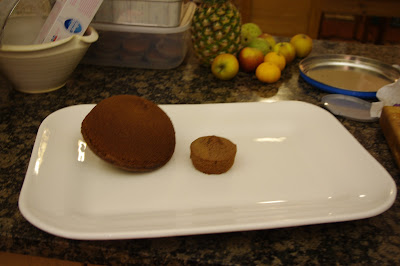 I wanted snow-white icing, but thought regular water and icing sugar would be too runny, royal icing would be too thick and heavy, so I created a cream cheese frosting and slathered it on.  Uh-oh, it felt like it might turn into a hedgehog again. 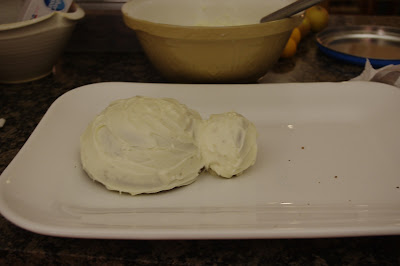 It wasn't quite as bright white as I had intended, but I had committed to it and there was no turning back.  I marked on some rather messy brickwork on the igloo, added white chocolate drops for a pathway, made a small pond out of blue 'ready roll' icing that I found in the back of the cupboard and sprinkled it with edible blue glitter.  A couple of handfuls of icing sugar later, I decided to add a Playmobil tree (nope, no trees in the Antarctic, but then again, penguins don't really live in igloos either!)...and da-daaaah: 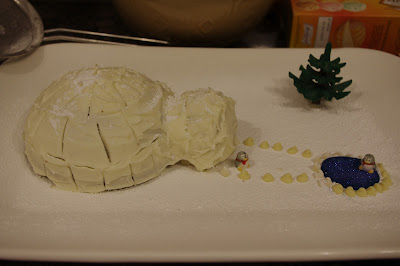 I broke the cardinal (and somewhat weird) rule of novelty cakes where everything on the plate is supposed to be edible.  Doh! one plastic tree and Doh! two china penguins.

And the girls went mad with some Baking Mad products I received through the post and decorated six cupcakes each and had a great, messy, sugary time.  We loved the Gold Lustre edible paint and the Giant Snowies.  The strawberry flavour chocolate buttons were pretty good too. 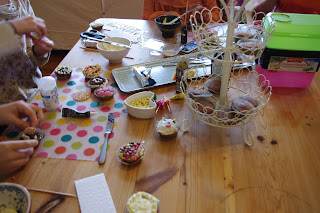 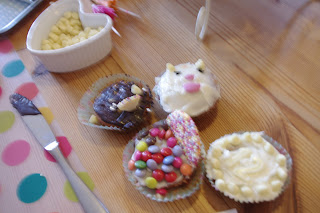 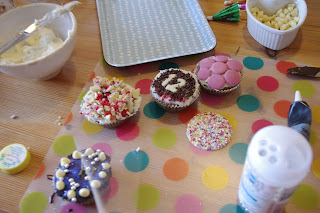 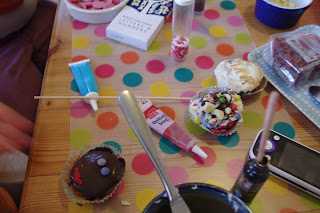 When I do that with my son, it always ends up looking like an explosian in a bakery. I love your igloo

those are so cute! and what a great idea for the winter season haha.

awesomee!!!! I love penguins (especially the tubby ones), so that cake looks ideal for mE! Btter still, it's chocolate cake!!!