An update: I have now have had two operations to remove cancerous brain tumours.  I had an MRI scan yesterday and not yet had the result.  7 weeks of radiotherapy from 8 oct-23 nov to zap it into obliteration I think.  It is not how life was supposed to be but it is how it has turned out.  Shame for my food blogging and food crit as I was really enjoying it.  My poor parents are also having to deal with my brother in law who is worse than me with a similar thing. I would like to thank my husband and two kids for being superstars when life throws such a curve ball at us like this.  Thanks for your well wishes and I shall concentrate on getting better as advised!

18 December 2012
--------------------------
As of mid-December I have had 33 sessions of cranio-spinal radiotherapy and my third 'tumour' has shrunk by half to about 3mm in size and has not spread. All good news. So I am feeling nauseous and wobbly but optimistic. I will need another MRI of my brain and consultant appointment in late jan 2013 and probably will have a whole day of Stereotactic Radiotherapy under general anaesthetic.

How do I feel? Sick, tired and worried. But 10 times as good as I did in August. I wish I just felt completely fine and normal but hey...the photo is of Freya's birthday cake that she made herself as I was too grotty to make one. Another side effect has been totally going off food! 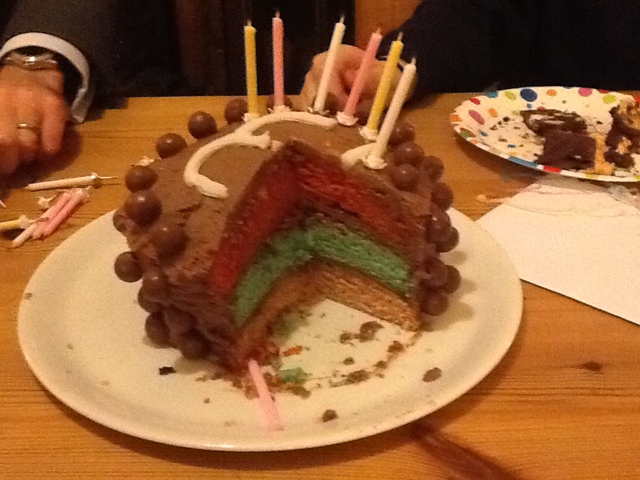 Still thinking of you here in France Katy and wish you a speedy recovery and hopefully in no time at all you will eating lots of scrumptious food again and making us all hungry with your blog! Send our love to Zoe and your folksXXXXXX The Dingley`s xxxx

Kate, somehow or another I missed your first post regarding the cancer, so was more than a little bit shocked to read this one! Bless you, what a horrid thing to have happen - and your Brother in law is going through a similar thing! You just couldn't make it up.

So here's wishing you every bit of good luck with the radiotherapy and any additional treatment - keep smiling through it all and stay positive. I'll be thinking of you and keeping an eye out for updates!

Kate, I'm so sorry to hear your news. Good luck with your treatments; it's amazing what the new therapies can achieve. I have a number of family members and friends now in remission from cancer, I hope you will count among them soon. You and your family are in my thoughts.

Good Luck Kate, still thinking of you and hoping the treatment is OK and more importantly works. Bad enough it happening to you, but two in the family at the same time. Do take care.

Phil in the Kitchen said...

The very best of luck with the treatment. Before too long you'll be enjoying the blogging world again, I'm sure. Getting better is definitely the thing to concentrate on.

So sorry to hear about your tumour. Let's hope the operations and the chemo are effective and that you can get back to your life. I'm glad you have a family to support you through this difficult time.

Oh my goodness! This post has just pulled at my heart strings. I am so so sorry that you're having to go through this. I hope your come out the other side a stronger person. My thoughts are with you and your family at this difficult time.

Great post. I will be dealing with some of these issues as well.
.
my web page :: breast cancer

as they say in Aussie land, "You'll be right, mate". With all your positive energy, you'll be back blogging about food in no time.

It seems a long time since August and I first read about what was happening. It probably feels even longer for you, although sometimes the work of managing health sets its own timeframe and appointments and things make diaries turn over faster than ever. Still thinking of you Kate and hoping that you are doing as well as you can in the circumstances. Keep taking care of and being gentle with yourself.

I AM feeling stronger! Not sure why. Still feel quite nauseous and been vomiting a bit which has curtailed my inclination and ability to 'graze'.

The latest brain MRI scan is the most positive yet and it seems that I am out of the woods for the time being, so be warned, more blog posts of yummy food will be appearing on the web. I'm back!!

Thanks for the positive comments and I hope you are enjoying the West Country inspired food and drink as much as me.

Thank you so much. Your donation via just giving was so generous too. I think of you guys living the dream out there and wonder how we would fare....

Thanks, jenny. I know you are all with me in spirit.

It is horrid not to fancy food. That is probably the worst part for me...well actually...

But that craving to bake, or cook or eat has disapppeared from my life and I am keen to have it back. It is starting to re-emerge thank goodness.

Thank you for your well wishes and good luck to you too for 2013.
Xx

I am hoping to be one of the lucky ones too. So far so good

Life has not been much fun for the past few months but I am starting to feel a bit more positive as I am still here!!

We are heading to Totnes on tues for lunch, of course, and to get some fab cheeses from Country Cheeses for xmas, so I was thinking of you too.

Those Paul a. Young chocs were very good but too unusual for me at the mo. my palate has become very bland and needs Marmite toast, weetabix and plain grilled chicken, not smokey or unusual flavours, mores the pity.

I hope Cornwall is treating you well and you are enjoying your food forays!

I couldn't even look at the pc about a month ago so I am trusting my body and mind when they want to return to these things and not a moment sooner!

The family have been wonderful.

I hated the 33 sessions of radio therapy and luckily no chemo at all...but I won't speak too soon as it might still happen.

All the best to you too.

I am sorry to upset you.

Sometimes I forget but that usually means I am feeling very positive.

Latest scan results are not bad and I am actually going out for lunch in a minute which must be good.

Trying my hardest with the positive stuff! I have just restarted blogging again today...will try to do it weekly but going to take it as it comes and not feel guilty if I do not manage

How lovely to hear from you - and with good news, too! What a fabulous Christmas present - thank you! :)

My advice to you where the fancying food thing is concerned is not to worry about it, but to answer when your body tells you to eat something. It might be a piece of cheese, or a malteser, or a plate of canneloni - but if you respond to your body's hints, you'll find you'll be back on the foodie wagon in no time. I suspect that you've had quite enough on your mind lately, that thinking about food has taken very much a back seat. :) Think of the fun you can have though, trying a bit of this and that as you go along! :D

Thank you so much.