I went along to the show with my mother-in-law.  We headed straight to the food tent where we sampled many wonderful things including many prize-winning cheeses, chutney and the recently launched, delicious and versatile Shute Fruit raspberry vinegar.

Devon County Show at Westpoint near Exeter, is on 21-23 May 2015 (Thurs to Sat, not Sunday as many people think) and it is a great day out: there is a huge food tent, many stalls promoting things as diverse as tractors, care homes, local newspapers and windows!  There are also many things for children to get involved with - one good thing was the BBC tent where there was live music, some local newsreaders, lots of seating and friendship bracelets for the children to make for charity.

There were many tempting food vans selling their wares too.  We had a Farmer Tom's ice cream (honeycomb flavour) and a refreshing Bloom Berry juice.  Was the placing of the Hog Roast van at the end of the pig sheds an accident or not?!  Perhaps you needed to be a farmer to get that joke. 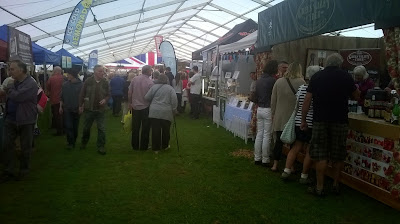 We saw many weird and wonderful animals: so many different breeds of chickens, ducks, goats, sheep, ponies, cattle and more...The sun was shining and it was really good to be outdoors. 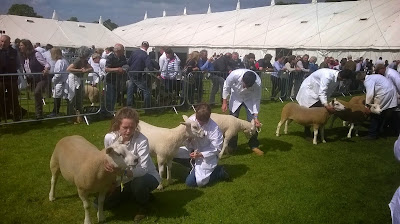 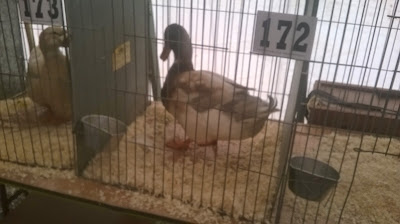 This duck was very big!

We also enjoyed mooching around the traders' stalls and watching the animals being judged.  We didn't necessarily understand the criteria, but it was good to watch regardless. 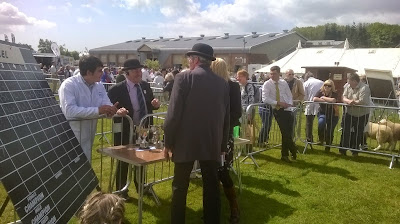 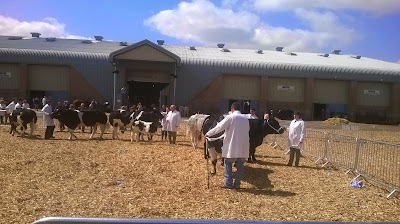 I think that it seemed a bit smaller (possibly after last year when torrential rain meant that the final day,Saturday, was cancelled and cars had to be taken out of the car parks by tractor on the Friday) but the show was still enormous, well-attended, really interesting and more than enough for me to see in one day (10am - 2pm).  The show was definitely quieter in the morning and got gradually busier as the afternoon progressed.