Hotel Chocolat - Putting Myself First for a Moment... 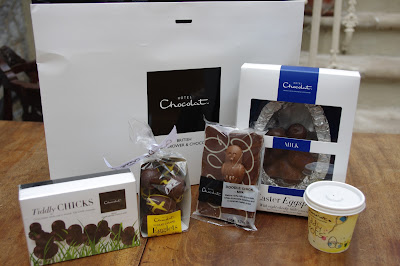 Food PR, and fellow food blogger, Beth, from Jam and Cream PR sent me this (initally) very attractive parcel of chocolate from Hotel Chocolat to review.  It's called the Essential Easter Collection and it retails for £35.  Initial impressions were favourable although I immediately felt unhappy with the amount of packaging: the Tiddly Chicks were in a packet with in a box within a bag within a box?  A tad excessive, even for mail order protection.

I decided to hold a tasting review panel with my husband and two children, aged 9 and 11.  The kids were, of course, rather enthusiastic to have an early Easter treat.  My children totally buy into the Hotel Chocolat thing.  When we visit Exeter, it's somewhere they nag us to take them.  They claim it's their favourite chocolate and love all the cutesy shapes and packaging.  They feel they're being spoilt if they get a bar of  this stuff.  My husband is of a rather more cynical persuasion (understatement of the year) and hates the shop and product.  'It's not a hotel, and chocolate has an 'e' on the end of it' is his response to their nagging.  'Overpriced' and 'style over substance' may also have passed his lips.

We gave each item a mark out of 10 for Presentation, Taste and Easter Factor. Overall winner was the Doodle Chick bar - slab of caramely chocolate with a chick moulded on the front.  The children adored the taste of this but both adults thought it was horrible - a caramely coconut taste that was too sickly.  In last place was the Easter Expose Half Egg - the most 'traditional' of the products.  We really marked this egg down for its cheeky claim on the side, something about 'we were advised to make thin eggs to save money but look how thick we've made it' - and it was thick at the visible edges and was really thin towards the back.

The Tiddly Chicks scored badly for their packaging but were cute and lovely if you like plain choc shaped little chicks (I do). 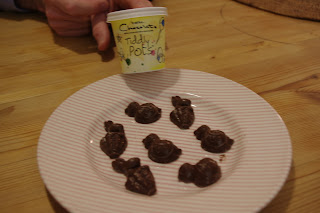 The Egglets (caramel eggs in a cardboard basket) were probably my favourite although they had been bashed around a bit in the post and weren't in perfect condition. 9 year old son really hated these and actually spat it out.

The Tiddly Pot - an Easter decorated cardboard cup filled with rabbit and chick shaped chocolates was a hit with the children but husband declared it looked like a cheap cup of carry-out tea.  He's harsh.

We enjoyed them, but didn't love them.  Huge divisions between which things the children liked compared to the adults.  Not an all round hit, but we all liked something.

Unfortunately I'm going to have to mention the wording on the packaging.  It's becoming a bit of a geeky pet hate of mine that I have to read all the packaging and I get quite wound up when it's spelt wrongly (my current bottle of Original Source Shower Gel has two spelling mistakes) and Innocent Smoothie cartons (yes, I found them refreshingly cute a few years ago, now I wish they'd bland themselves out a bit and just provide basic info).  So the offending words from Hotel Choc?

'And with the absolute minimum of recyclable packaging, putting yourself first for a moment won't cost the earth.'

Firstly, there's a double meaning there - 'the minimum of recyclable packaging'  - so they've used as little recyclable packaging as possible?  Great, chuck it all in landfill then.  They need to lose the word 'recyclable' rather than putting it in as a soundbite.

Secondly, the idea of 'putting yourself first for a moment' - i.e. being selfish, having your little chocolatey moment and buying stuff with lots of packaging isn't that endearing to me.

Also the bag says British Cocoa Growers and Chocolatier.  Presumably this is trying to position themselves in a niche that Cadbury has vacated.  I've looked at their website and they explain their rationale for not being Fairtrade, as they have their own plantations in Ghana and St Lucia and work / trade ethically there.  OK, I was going to ask where they grow cocoa in UK as I would think that's impossible.  So is that moniker also a tad misleading?  They grow cocoa abroad.

Aha!  I've found it!  There actually is a Hotel Chocolat - it's in St Lucia and opened at the end of Feb 2011 and it's all part and parcel of their brand.  I'm off to tell husband that actually they ARE a hotel.  And I would really like to go there if my eco-conscience and money would allow.
at March 16, 2011

3rd time lucky - it wouldn't let me post again first two times I tried. Good review. I checked the info on my egg after you'd alerted me and it didn't mention the packaging at all - so no consistency either.

Note to self* Must not read posts featuring chocolate when hungry and all the shops are shut.

My mouth was watering by the end of the piece!

Choclette - I wonder why you're having these probs with posting comments on my blog - probably a blogger issue.

Gayle - I know, it's lethal to read food blogs or watch cookery programmes when hungry. In fact just writing that has made my tum rumble!