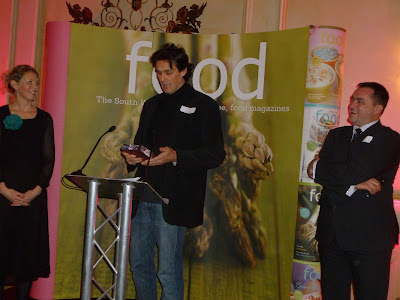 Just got back home after attending the first ever Food Magazine Reader Awards event this evening.  It was held at Michael Caines' Abode in Exeter, a fine venue, the room brightly lit in Food Magazine's trademark bubblegum pink colours.  Thatcher's cider, Frobisher's fruit juices and Champagne were flowing.

Canapes were sole goujons served in miniature cardboard cones with a chunk of lemon and some tartare sauce, fish / quail's egg scotch eggs, mini skewers with baby mozarella, roasted tomato and basil.  All quite yummy.

The votes had come purely from readers (unlike some other foodie awards which can be a little bit 'manufactured') and covered the whole of the South West region - Gloucestershire, Somerset, Dorset, Devon and Cornwall so there was some stiff competition.  I chatted to the lovely people from Thatcher's cider (I hadn't realised until this evening that the current owner is fourth generation Thatcher and that they're a fairly small operation, as a Westcountry girl, I just thought they were everywhere and huge.) 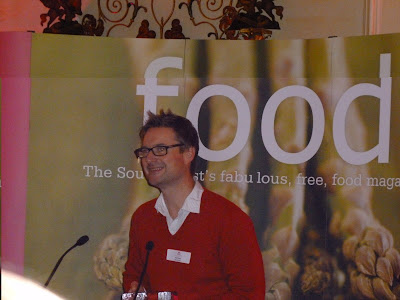 The chap from River Cottage accepting the award on Hugh's behalf- we weren't really disappointed that Hugh wasn't there... 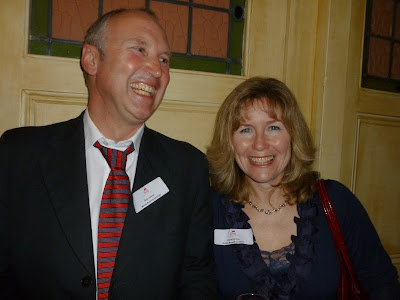 The happy couple from Mendip Moments

Mendip Moments Ice Cream, shortlisted in the 'Food' Category, is now on my list of must-tries - apparently it's available from Chandos Deli in Exeter so I'll pop in next time I'm at Princesshay. Hey guys you didn't tell me you have Fig, Mascarpone and Honey flavour - yum!!   They were one of three products shortlisted in the Food Product category.  What a huge and varied category.  Considering all the food that is produced in the South West...

Some of the acceptance speeches were incredibly brief, but I found it quite endearing when the Best Chef, Adam Fellows just said ' Thanks, and thanks to my wife' and hurried off clutching his rather luscious and chunky pink Dartington Crystal award.  I think the chap from Browns Hotel may have even just said 'Thanks very much'. 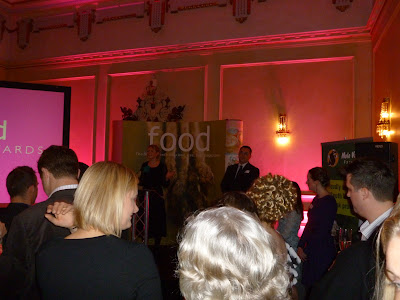 Really enjoyed myself so thanks to the lovely folk at Mole Valley Farmers who were so chatty and friendly (and were the main sponsors of the event) and to Food Magazine for inviting me. 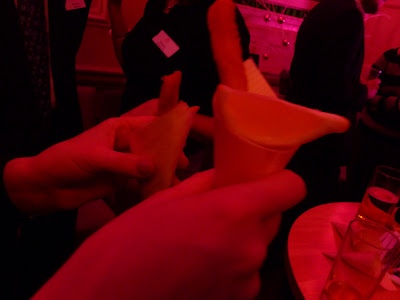 It was very pink in there.  These were the sole goujons in cones modelled by Yvonne from Thatchers!
at January 09, 2012

Wow you got this post in quick Kate. Looks like a good evening for SW food.
Great to see small food producers getting a look in as well as the big names.
Cheers
Marcus

Thanks, Marcus. Yes, I think I was buzzing from my glass of Champagne and on a mission to get my blog post done nice and quickly!

It was a good mix of small and larger brands which made it all the more interesting.

Glad you liked the "do", Great evening!!