I visited the Toorak Hotel in Torquay this week.  It is part of the TLH group.  I was at Oak House at the weekend, Bovey Castle last week and Dartington Hall a few weeks earlier so I had to look at this with new eyes as it was an entirely different experience and probably in an entirely different price range.  It was boiling hot and had no aircon (but what hotel in UK does?!)  The bedroom was OK.  It was not modern and the bright blue stripe around the ceiling was bizarre.  Why was it not white?  It was just me staying there and the room slept three people so it was spacious and ample.  The room was clean and tidy but at one point I did get a cobweb in my face so it might not have been used for a while.  I have just looked up the prices and discovered that the room costs about £133 for B and B.  I thought it would have been more reasonable. 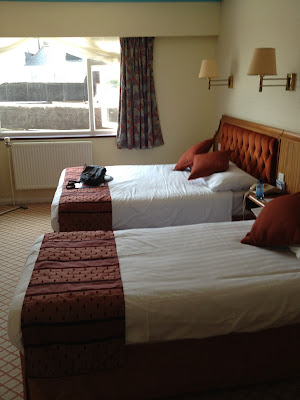 The view from my room was pretty bad, and I was a little worried about security as there was a flat roof beneath my open windows. 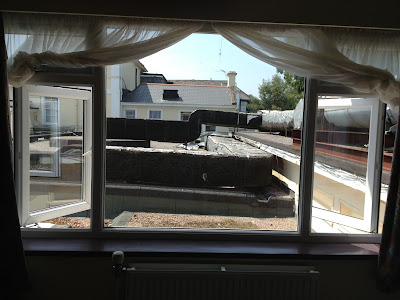 I spent a few hours by the outdoor pool (included in the room price) which made me feel like I was in Europe.  I have to admit that I swam in the indoor Aztec Spa pool as the outdoor pool felt too chilly and was filled with children.  There are two very nice pools within the Aztec facility - both open for free to residents.  One was cooler, rectangular and larger, the other was warmer and not so much for doing lengths - more of a leisure pool.  There were other leisure facilities that children would love and if I had been there longer, I would have used them. 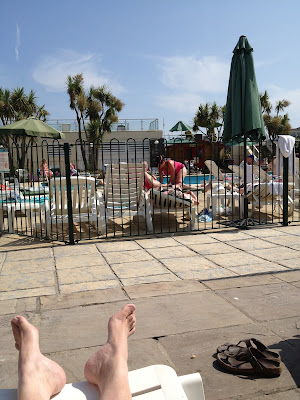 As the sun went down, the outside terrace was perfect.  Overlooking the tennis court here, safely in a chair of course!  The bed was comfortable overnight and the wake up call was efficient and on time.  The bathroom was clean. 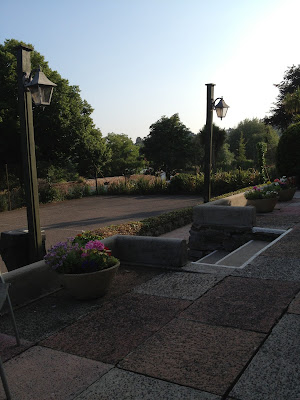 I was a guest at The Toorak Hotel but I was allowed to write what I chose.