We were recently in Cornwall and spent a week on The Lizard, the peninsula that juts out at the bottom of the South West of England that actually forms the most southerly point of England. Coverack is a lovely village there - I am exceptionally fond of it, but have never tried the restaurant at the end of the harbour. Fishing still occurs here, so the fish really doesn't have to travel very far - up the slipway to the restaurant, The Lifeboat House. In summary: exceptional views, great food and amazing service. 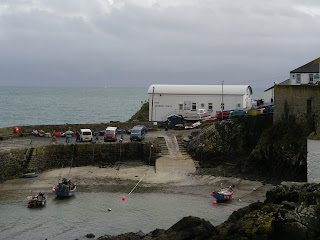 Even with an overcast sky, this place is picturesque: 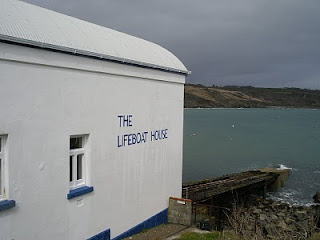 We could only be fitted in for lunch at about 1:45pm as they had had the entire cast of a documentary in full period costume in for lunch. I did a double take as we passed ladies and children in old Cornish costume (looked rather like grey blankets edged with lace) and in the absence of filming equipment, we did wonder initially if they belonged to some local sect or whether they always dressed like this. Wish I'd taken some pictures, but at this stage I didn't know they were actors! They certainly gave the village an out-of-time aura.
The panoramic window displays a stunning view of waves, cliffs and bobbing lobster pots. Only one house was visible in the distance. We could see cormorants and gulls and earlier my mother saw a turnstone. This is the view from the restaurant - the sky was fairly overcast - on sunny days, the sea is turquoise: 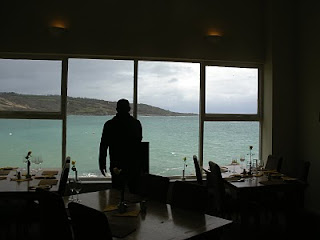 They had four options for fresh fish on the board - choose your own sauce - today's special was 'Coconut and Beetroot'. We didn't fancy a full blown 'meal' so our amiable host suggested a whole load of tapas style platters and asked if we had a preference more for meat or seafood. My parents are a bit iffy with seafood, so we said to go easy on that. Shame on us being in a fish restaurant!
The children had vast 'child portions' of crisply battered fish and chips (the fries were soft and fluffy on the inside) served with homemade mushy peas. Wasn't too keen on the ketchup sachets. The homemade bread rolls with cheddar and chives were lovely: 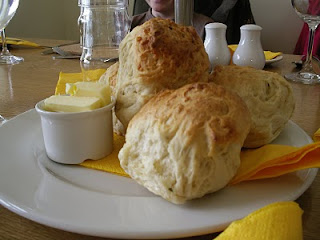 The owner-waiter was friendly, chatty, down-to-earth and humorous - keen to extol the virtues of the Cornish food. He even asked if wished to have the music on or off. And this was the seafood salad - 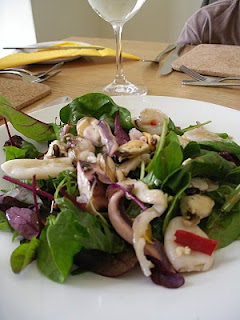 Unfortunately my photos of the meats and cheeses were slightly blurred, so I'm not going to post them. It was so good to go somewhere where they tailored the food to the customers' desires - 'Tell us what you fancy' - reminded me of visiting an Enoteca (wine bar) in Italy, where they ask what kind of thing you feel like eating and then just start producing lovely homemade dishes.
The deep fried bread crumbed herby chicken nuggets were pretty good (liked the fennel seeds), the platter of meats was hard to get wrong, but it was just what we fancied, the three Cornish cheeses were lovely and these were accompanied with two dishes of olives, a bowl of new potatoes with roasted squash, all washed down with a decent glass of white Sauvignon (me) and a pint of the local Doom Bar (other half).
My (extremely minor) gripes would be - the sachets of ketchup - the restaurant's too good for that, and I'm not keen on the carpet on the floor. It's probably for warmth, but I feel like it doesn't go with the vibe of the place. The single yellow roses (with matching yellow paper serviettes) on the tables made me cry out for daffodils - there were fields of Cornish daffodils on the way down here.
Only two of the six of us managed pudding. Apple crumble and lemon cheesecake were both good but the homemade chocolate fudge served with our coffee was what we all made 'Mmmmmm' noises over!
And the bill? No price was quoted beforehand and as we'd just agreed to have non-menu platters, they could have charged the earth....but £5 for the children's Fish and Chips and £9.50 each for the adults' platters seemed very reasonable.
A memorable and enjoyable lunch in an exceptional location.
at May 12, 2010

Wow, could you get a more perfect spot!

I do miss the romance of the English coast,grey skies and blustery winds are the best part of it.Do you get down there in summer much?

How lucky you all are to spend your holidays there!

I think you'd be shocked at how expensive it is to eat at the beach here in Australia, those prices seem remarkably cheap!

We go down there as often as poss - it's only two hours away. Funnily enough, a lot of Cornwall has really pushed the prices up to ridiculous levels (more expensive than eating out in London) but we try to stick to the more reasonable ones that don't take us non-locals for a ride.

I've just had another friend extolling the virtues of fair Melbourne - aghhh! stop, all of you, I know I'd love it! Just stop tempting me. Look, I've got wonderful Devon and Cornwall on my doorstep.

We love the Lizard and have now spent two summer holidays down there - we only live in Liskeard! Lovely as Australia is, it can't beat Cornwall - not that I'm biased or anything!

Hi Choclette - do you have any fave eating spots on The Lizard? I think we've tried most of them at one point or another, but there may be some that we have missed.